The Perils with Option Strategies 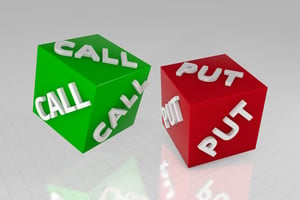 Ignore the avalanche of TV commercials touting the money to be made using option strategies. The big money they refer to is for them, not you.

There exists an incestuous relationship between the media and the members of the financial industry who buy advertising. Much of the money spent on ads that allows financial news shows to remain on the air is provided by (surprise!) financial custodian firms that promote trading, peddling the preposterous idea that anyone can beat the market if given the "right" information and investment tools. Virtually every E*trade, Schwab, and Fidelity commercial is geared towards trading because that's how they make their money. The more investors trade, the more options they trade, the more money the custodians make.

Options are a type of derivative security in which the option's price is linked to the price of something else. Alternative investments that use options to ostensibly enhance returns can be alluring, right up to the point where the strategy collapses. How would you like to have been one of the investors (hopefully you weren't) in the LJM Preservation and Growth Fund who received an email one morning stating that the strategy had suffered "significant losses?" That was quite an understatement as the fund plunged over 80% during the first week of February, 2018.

The email, signed by LJM's Founder and Chairman Tony Caine, said (incredibly) that the firm's goal was to "preserve as much capital as possible by hedging with as many futures as possible to attempt to insulate portfolios from further losses." He caveated that their "ability to do so depends on market conditions and liquidity."

Evidently, the "preservation" aspect of the fund's options strategy failed to take into consideration what was deemed to be the insignificant factor of market conditions and liquidity.

A large Registered Investment Advisory firm I know well replaced some of its long-only bond positions with an alternative strategy in an attempt to reach for yield for its clients. In doing so, the firm, with its pedigreed Ivy League educated investment committee, constructed a fund of funds with complex alternative strategies which included the LJM Preservation and Growth Fund. I cautioned the firm's principal about the dangers of a portfolio in which the risks couldn't be measured and suggested an approach I preferred: simply owning individual bonds in companies I could understand. He scoffed at such an approach and displayed his enigmatic, back-tested formulas that predicted his portfolio would produce higher returns than ours with less risk. The story's ending - how our firm's "boring" strategy subsequently provided a sounder approach for our clients - needs no further explanation.

So many of these alternative strategies employing options or leverage produce, at best, mediocre returns and, at worst, fail miserably, leaving carnage in their wake.

--
"Trading can be hazardous to your wealth."
-Professor Terrance Odean