During his annual shareholder meeting in 2018, Warren Buffett advised investors to put all their money into the Vanguard 500 index. In contrast, "The Big Short" investor Michael Burry recently explained why the wildly popular inflows to index funds are distorting the prices of the stocks they are designed to track and warned about the bubble.

I agree with Burry (made famous in the movie based upon Michael Lewis' besselling novel "The Big Short") and disagree with Buffett's advice for numerous reasons articulated below including Burry's overvaluation argument.

First, investing all your money into an ETF or mutual fund which invests in the S&P 500 index provides limited international diversification. In addition, indexes such as the S&P 500 are market cap weighted and may become heavily biased towards growth. An example is the Vanguard Index 500 Admiral Shares (VFIAX) which contains almost 20% of its total holdings in just seven stocks (see below chart). 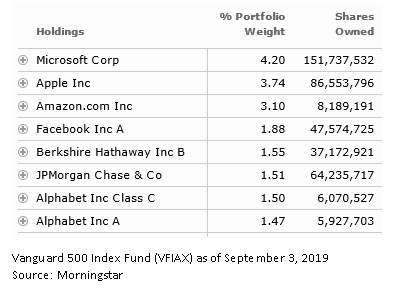 Why Owning Bonds Is Important

I have another issue with Buffett's suggestion: most investors do not have the wherewithal nor the temperament to stomach downward spirals like the 40+% declines that have occurred twice during the past two decades. The Nasdaq suffered a collapse that saw it drop much further during the tech bubble. When investors experienced such a decline during the financial crisis, they fled the market in huge numbers and went to cash, missing out on much of the subsequent upturn. Imagine someone retiring just as that decline began, seeing their $1 million portfolio cut in half.

Market cap indexes with heavily concentrated holdings, as found in the S&P 500 and even more so in the NASDAQ, are prime candidates for these types of principal losses. Buffett's home bias ("Don't bet against America" he has frequently said) may be a patriotic posture, but is he sure the U.S. is going to continue to be dominant? Can investors afford to ignore the enormous potential of markets like China, India, Brazil, and others? I have risked my life for this country but as an investor, I think it's a mistake to say "USA, USA" and discount the rest of the world. 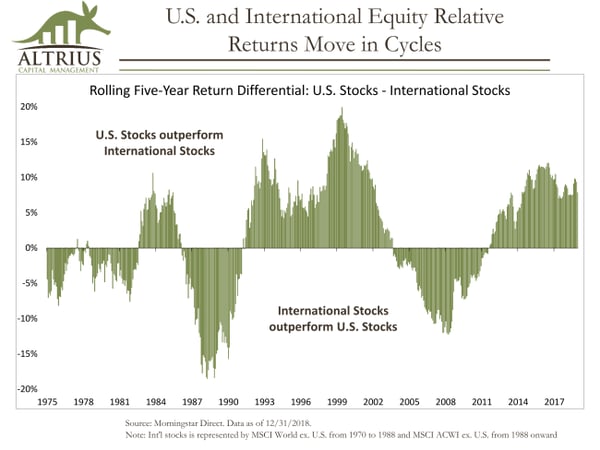 I believe Nestle is more attractive than Hershey. Nestle is a wonderful company that's growing globally and just happens to be headquartered overseas. Budweiser is an example of a great American brand that was inefficient and was taken over by InBev, an exceptionally well-run Belgian brewer. Most people in the U.S. have never heard of InBev, but they would recognize many of its brands, sold in 130 countries around the world. A formerly well-known American company like Anheuser Busch is now a Dutch company that has eliminated much of the waste from Budweiser's management team. Does that mean you shouldn't own it because it's no longer American?

That's where I think Buffett gets it wrong. Only in recent years has he begun to look overseas.

Perhaps my perspective is different than his because of the influence of seeing the world as a Marine KC-130 pilot, spending time in places like Africa, where I saw the impressive distribution of Coca-Cola. There's tremendous growth potential there and in India and China too, where they have growing populations. If you're the CEO of a company and all of your sales are based in the U.S., wouldn't it make sense for you to consider overseas distribution, where the potential for growth far outweighs that of the U.S.? Some of the great American banks are not highly regarded in Great Britain or Italy, where they have a bias towards their own banks. If, as an investor, you believe the statistics that indicate China is a growing economy and American banks don't have a strong presence in China, why would you only buy American bank stocks? You need to think globally.

Altrius has always had a value-driven approach whereas many money managers lean towards a growth/momentum strategy. It's common to find money managers' portfolios laden with growth stocks like Amazon and Google (Alphabet) - both with very expensive multiples.

Though I am a customer of both companies, I think buying a company at 100 times earnings is crazy and though I have no intention of ever selling my company, should someone offer me 100 times earnings due to our potential growth opportunities, I would be foolish not to accept!

Growth/momentum strategies have been driven greatly by FANG (Facebook, Amazon, Netflix, and Google) stocks and are currently highly appreciated and expensive. In contrast, value stocks have not been driven to excessive valuations. Over the long term, a value investment approach has meaningfully outperformed a strategy of buying expensive (high-multiple) stocks. However, cycles persist. Value investing has had several periods of significant underperformance as we've also experienced over the past decade. The inability of most investors to stick with a value approach during such cyclical reversals is likely what enables the "value premium" to persist over the long term. Moreover, the short-term, performance-chasing tendencies of most investors pushes the pendulum still further. As the below chart illustrates, the strength of outperformance of growth over value stocks hasn't seen such an extreme since the tech bubble burst in 2000. Is it prudent to continue investing in such companies and indexes loaded with these positions? 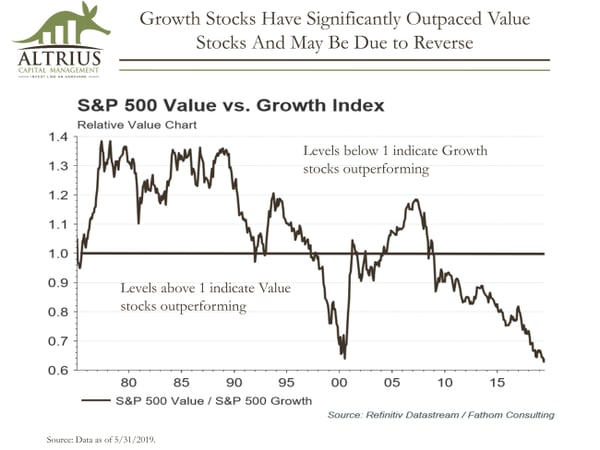