My Thoughts on Mixing Religion and Investing 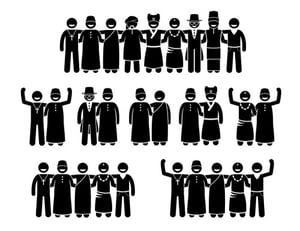 Though I thought long and hard during many periods of my life about a calling to the priesthood, I would never feel comfortable building my business by using religion as a marketing plan. For one, I understand that I am an imperfect man incapable of living up to perfect ideals. I wouldn't want my clients and friends to entrust their assets to our firm with an expectation that I will not make mistakes in my life and potentially become disillusioned by my missteps. Secondly, I don't know if God wants us to be financially successful or not. The ideals I've studied for endeavoring to live a noble life have little connection with monetary things and many, like St. Francis and Mother Teresa, have lived with little worldly possessions while leaving a remarkable legacy. Faith, hope and charity require a belief in the Divine while the cardinal virtues of prudence, temperance, fortitude, and justice may be well exemplified by non-believers alike.

Though falling short daily, I attempt to apply the cardinal virtues in my life, coupled with our firm's Guiding Principles of Integrity, Humility, Competence, and Compassion. I was also profoundly impacted by my time at the Naval Academy, inculcating our Honor Code that a Midshipman will not lie, cheat or steal. Though our firm has been built on a foundation of trust over the past two plus decades, I remind our associates often that we can ruin that trust with just one lie or worse, an act of thievery.

There are numerous faith-based funds associated with various religious groups. Religious affinity investments represent billions of dollars. One financial advisor in the Atlanta area with billions under management offers "Principles-Based Investing combining a deep understanding of timeless biblical truths" according to its website. While the majority of these funds and strategies reflect the values of the religious groups they purport to represent, it wouldn't take much effort to append a couple of bible verses onto almost any investment principle and declare one is a bible based advisor promoting prosperity through faith.

CNBC's "American Greed" series features a number of episodes about religious investment scams, many of which revolve around an advisor involved with a church. The trusting nature of many religious worshippers, and, often, their fervent wish to help others, have opened the floodgates to the evil deception of the church scam. Others, like Bernie Madoff, scammed many in the Jewish community.

Church scams can happen when members of a congregation, a church, temple or mosque, or even a whole religious organization, are fooled into parting with their money either for a supposedly profitable investment or simply to support an individual who claims to have fallen on hard times.

Tens of millions of dollars have been plowed by individuals into hopeless projects that have turned out to be Ponzi schemes.[i]

One Ponzi scheme promoter sold promissory notes bearing purported annual interest rates of 12% to 20%, telling primarily African-American investors that the funds would be used to purchase and support small businesses such as a laundry, juice bar or gas station. The promoter also sold "sweepstakes machines" that he claimed would generate investor returns of as much as 300% or more in the first year.

Self-proclaimed "Social Capitalist" and former CEO of City Capital Corporation Ephren W. Taylor, II operated a Ponzi scheme to swindle over $11 million, primarily from African-American churchgoers. To tap into the investors' largest source of available funds, Taylor encouraged investors to roll-over retirement portfolios to self-directed IRA custodial accounts, which he facilitated, and then invest those funds with Taylor and City Capital. In reality, City Capital never generated significant - if any - revenue from actual business operations, but instead was wholly dependent upon a continuous stream of new investor funds just to stay open. When new investor funds dried up during the latter half of 2010, the entire operation ground to a halt, leaving hundreds of swindled investors.[ii]

Another Ponzi scheme in Dallas, TX raised almost $6 million from nearly 80 evangelical Christian investors through fraudulent, unregistered offerings of stock and short-term, high-yield promissory notes issued by their company, which was marketed as a voice-over-internet-protocol video services provider around the world.

On April 30, 2012, the SEC filed settled fraud charges against the company, alleging that owners Terry and Scott Wiese promised extreme returns - as much as 1,000% in a year - to entice investment in their company, Usee, Inc. Contrary to the Wieses' claims, however, Usee had no business from which to generate any returns to investors. Instead, the Commission alleges that the Wieses wasted investor funds on poorly considered ventures or sent them to third parties about which they had little information. The Commission also alleges that the Wieses used investor funds for personal expenses and to make Ponzi payments to investors.[iii]

As with social or political predilections, I advise investors to not let those preferences cloud their investment decisions. Instead, I recommend donating to the charities and causes they feel most strongly about from their income or the profits from their investments.

Regardless of a company's environmental, social, religious, political or governance positions, I'm not going to invest in it if I don't like their fundamentals, their business or their growth potential. I'm perfectly content to let the executives who are closest to the business make the decisions to best guide the company as their incentives are generally aligned with shareholders. Should they not do so, the board and shareholders will eventually find a management team capable to make the requisite changes for the company to remain in business and eventually grow again.

I don't get involved in activism because I don't believe it is time well spent or impactful on performance. Like the aardvark, I know there are certain things to be aware of, such as predators out there trying to eat you. On the other hand, there are things you can't let bother you, like the weather. Whether it's the hot sun or the driving rain, you can't let it prevent you from getting out there and finding what you need, understanding that the noise coming from political, religious, environmental, social or governance issues are mostly inconsequential to the long-term profits of a company.

[i] "Let Us Prey: How Church Scam Artists Get Away With Millions," scambusters.org
[ii] "Affinity Fraud: How to Avoid Investment Scams That Target Groups," sec.gov 9 Oct 2013.
[iii] Ibid.