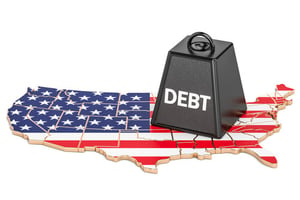 Though few believe government shouldn't be helping its citizens and the economy during this crisis, some of our clients have expressed concerns about our rising national debt. Below is the emailed question and my answer concerning his debt question.

Client question: When does our debt get to a point where it collapses on itself and we can't justify the ink and paper we use? Or, when its value is depleted?

My reply:
Ah...that is truly one of the many $1 million dollar questions that we economists love to debate. Though I will never have the time to get a PhD and win the Nobel prize for my confidence theory (nor do I remember enough from my four semesters of calculus to do so!), it is an ongoing discussion as to what is the "right" amount of debt for a nation to hold. Importantly, the dollar amount ($24 trillion+) doesn't matter as much as the ratio of a nation's debt to its Gross Domestic Product (GDP) and the confidence in that nation's ability to repay its debt from its capacity to tax its people (which also impacts its currency value).

No one wants to go back to the stagflation during the Carter years though our debt was very low at approximately 30% of GDP. Of course, massive government spending during the Reagan administration skyrocketed debt to almost 70% and we had sound economic/market growth and defeated the Soviet empire in the process. We have also been at our current level of debt to GDP (~ 100%) during WWII which of course was necessary to defeat the Axis powers. It was this massive spending which enabled us to finally break the Great Depression.

As you and I are patriots, we worry about the debt being excessive as investors may lose confidence in our nation's ability to repay our national debt. This has happened to many nations which actually had much lower debt to national income (recent examples in Ireland, Iceland and others which had just ~ 30% during the financial crisis). However, we know that nations which maintain their productivity, output and growth will be able to fund reasonable amounts of debt assuming inflationary conditions remain low.

The question is what is a reasonable amount of debt? Currently, investors/savers must pay Japan, Germany, Switzerland and France to hold their money as their interest rates are negative. Recently, the United States also went negative on our 1-month through 3-month treasury bill yields. This means, should one give the Swiss government $100,000 by purchasing a 5-year Swiss bond, you would need to pay them $500 each year. Under such conditions, wouldn't it make sense for the United States to borrow more money in order to earn interest on those unwilling to invest in a corporation's bonds/stock as we do or to invest their capital in real estate projects, private businesses or other enterprises?

Banks are more than willing to lend us three times our income to purchase a home which has generally proven a sound investment for them over many decades. i.e. an individual with a $100,000 salary could purchase a $300,000 home (with a 20% down-payment). As capitalism and our modern economy is a relatively new 300-year experiment, we may eventually find that every government should borrow much more than its current debt level. Certainly, Japan hasn't seen any lack of investment though its debt to GDP is over 200%. Contrarily, this may only be possible for very established nations and not for those more dependent on one to two particular industries. i.e. Venezuela, Iceland, Ireland, etc. This again goes to my confidence theory as once confidence is lost in that nation, a "run" on its debt will be made and it will lose its economic strength.

As we grow older, many of us worry about the generations that follow us. It is a good worry to have as this issue may certainly be a challenge for our American children and grandchildren. However, unlike politicians on both sides of the aisle who like to proclaim that we are saddling "our children and grandchildren with debt", generations who come behind us will not actually be forced to write a check to pay off their share of our nation's debt. It's a good political ploy, but it is not sound economics as government debt is not like personal debt and is never paid off. Like many corporations, governments simply increase or decrease their debt based upon their budget objectives (defense, roads, health care, etc.). A nation's interest rate is set based upon many economic factors, but ultimately at a yield which adequately compensates the investor for the risk he or she is taking. For example, a nation (or corporation) with a higher probability of default is compelled to pay a higher interest rate. Thus, think of a nation's debt as more akin to an adjustable rate mortgage in which the 5-year ARM is adjusted every five years as the bank doesn't require that the individual pay off their mortgage at the end of that five year period.

Entitlements such as social security and healthcare have a large impact on a nation's budget and its debt. Many emerging nations do not have such social safety systems which enables their debt to be lower and their budgets to be more flexible since they don't have such fixed costs. As governments usually only tackle large problems when pushed to an extreme (seen from Democrats and Republicans working together during this and last financial crisis), the entitlement issue will eventually need to be dealt with if America is to remain competitive in the world. Should our people grow too lazy and decide to tax the few productive people as we all sit on our couches expecting free health care, retirements, a new car, etc., those productive capitalists will go elsewhere as capitalism will find and outlet where it is welcome. When investing, it is important to separate an investment in a country's bond from a company's corporate debt which simply has its headquarters in those nations. Even under more socialist regimes, which have older populations and heavy entitlement burdens, great European companies we own have found ways to sell their goods globally.

We of course can't go back to the gold standard as there isn't enough gold for the current global monetary system. Nor do I believe we should as forcing an inability to expand our debt and the money supply only guarantees depressions. We certainly need to care for our poor and elderly (though there remains much debate of course as to whether the private or public sector does it better), but we will also eventually need to fix entitlements. Social security is much easier as we can simply raise the eligibility age. We are all living longer and healthier. As work isn't a four letter word, we should probably all be working longer. During the early 1950's, we had over sixteen people working for every one in retirement whereas today we have less than three working for every one in retirement - and we are living much longer than we did decades ago. Medicare and Medicaid of course are much more complex. If I were king for a day, I would establish a major medical insurance system which would require people to purchase insurance - much in the same manner as purchasing auto or home insurance. Allowing doctors to compete for their patient's cash payments would keep prices in check as competition would drive down prices as it does for elective procedures such as is the case with plastic surgeons, dentists, orthodontists, optometrists, etc. Unfortunately, we have gone in a very different direction in which prices will only continue to rise as there are too many bureaucratic levels.

The miracle of capitalism is found when one looks at a $1 can of peas in a grocery store. If you consider how competition is involved in every level to drive down the cost between the farmer growing the peas, the transportation to the market, the metal used to make the can, the food company marketing the product, the supermarket selling it, etc., it is truly a marvel of competition. Imagine if government were in charge of such an operation. If grocery shopping were conducted like our health care system, we would simply pay $25 as we came into the store and fill up our carts not caring about the cost of the cans (with no labels or prices on them) and then walk out of the store. In a week or so after returning home, we would receive some convoluted bill for $136 for additional expenses after paying our monthly $1,000 food insurance bill. Unfortunately, we are now stuck in this health care system and no politician's promises to reduce health care costs will occur under our current system. In my opinion, we would certainly be better off under a cash-based, major-medical type of system and tax wealthier individuals to assist the poor to subsidize their premiums.

The challenges ahead for our nation are significant, but should be thought of separately from those as global investors in corporations. With sound government policy, our nation can invest in our future (in order to pay the interest on its debts) while also supporting liberty and prosperity to unleash the remarkable ingenuity, creativity and productivity of the American worker and businesses. It is just such action which will empower innovations in our healthcare, technology, energy and industrial sectors to ensure America maintains its place as the world's economic leader.