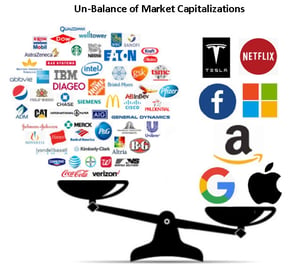 Growth and momentum investment strategies have been driven markedly by FAAT MAN stocks - Facebook, Amazon, Alphabet (Google), Tesla, Microsoft, Apple and Netflix. These companies have experienced exceptional returns in recent years and subsequently carry very high valuations. As of this writing, the tech behemoths have a larger market capitalization than fifty-five of the remarkable global brands which we currently own.

Like moths to a flame, investors and institutions are purchasing the companies and broader indices lured by recent returns while the race to the lowest fees by passive mutual fund and ETF providers has driven expenses to effectively zero thereby attracting even more investment. As the outperformance of passive investments (index ETFs and mutual funds) has been strong against actively managed investments, it has become a self-reinforcing loop of herding behavior coupled with recency and confirmation biases. The performance of large cap indices has garnered more investment and in turn driven the market caps of these companies to even higher valuations. 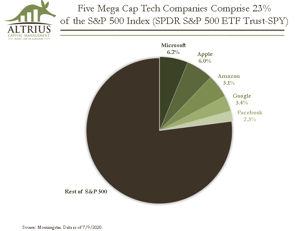 During his annual shareholder meeting in 2018, Warren Buffett advised investors to put all their money into the Vanguard 500 index. I disagree strongly with his advice.

Because indexes such as the S&P 500 are market cap weighted, they are heavily biased towards growth. An example is the SPDR® S&P 500 ETF (SPY). As of this writing, Microsoft, Apple, Amazon, Alphabet (Google) and Facebook comprise a massive 23% of the ETF. Incredibly, these same five stocks encompass over 46% of the Nasdaq Composite (Invesco QQQ Trust).

Altrius has always had a value-driven approach whereas many other money managers prefer growth and momentum strategies. It's common to find money managers' portfolios laden with growth stocks like Amazon, Netflix and Tesla – all with very expensive multiples and which offer zero dividends to investors. 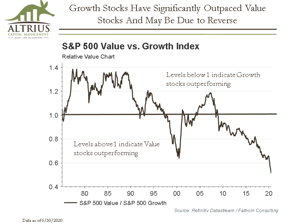 Though growth and momentum strategies are carrying extraordinarily high multiples (price to earnings ratios), in contrast value stocks have not been driven to such excessive valuations. Over the long term, a value investment approach has meaningfully outperformed a strategy of buying expensive (high-multiple) stocks. However, cycles persist. Value investing has had several periods of significant underperformance as we've also experienced over the past decade. The inability of most investors to stick with a value approach during such cyclical reversals is likely what enables the "value premium" to persist over the long term. Moreover, the short-term, performance-chasing tendencies of most investors pushes the pendulum still further. As the chart above illustrates, the strength of outperformance of growth over value stocks hasn't seen such an extreme since the tech bubble burst in 2000. Is it prudent to continue investing in such companies and indexes loaded with these positions?

Mistakes chasing momentum are not limited to individual or even institutional investors. Some of the most widely heralded managers have fallen prey. When long-time Fidelity manager George Vanderheiden was forced into resigning, Karen Firestone took over the reins of Fidelity’s Destiny I fund. Under Vanderheiden, the Destiny I fund had returned 19.3% annually from 1980 through his departure in 2000, an admirable record. However, when value stocks fell out of favor during the tech, internet, and growth stock run up in the late 1990’s, Vanderheiden refused to join the stampede and was ultimately replaced. Apparently, Fidelity executives believed that he didn’t understand “this time was different” and that “internet stocks were the future.”

According to a 2000 New York Times article, “Mr. Vanderheiden said he thought a value revival might be just around the corner, noting that the end of other investing crazes — the run-up in the Japanese stock market during the 1980's, the biotechnology craze of 1991 and the rise of the Nifty 50 in 1972 — all fizzled around the start of a new year. ‘What I've found over a lot of years is that a lot of these manias seem to end at the end of the year’."i

Vanderheiden had it dead right. Firestone, on the other hand, had no hesitation plunging the fund into tech stocks, just in time for the tech bubble to burst. Firestone, who worked under Peter Lynch since 1983, should have known better. She later admitted as much in her 2016 book, “Even the Odds.”

“2000 and 2001 were really gut-wrenching. In a personal sense, I felt worse in 2000, because there were so many signs of a bubble. My predecessor on Destiny Fund, George Vanderheiden, was so right that this tech bubble was going to burst. He had gotten out of those stocks in 1998,’’ Firestone said. When she took over, it was tough to stay out of tech stocks at the risk of falling behind the competition in a go-go market. But the downdraft was painful. “I really felt as if I should have known better in 2000.”ii

This report includes candid statements and observations regarding investment strategies, individual securities, and economic and market conditions; however, there is no guarantee that these statements, opinions or forecasts will prove to be correct. These comments may also include the expression of opinions that are speculative in nature and should not be relied on as statements of fact. Altrius is committed to communicating with our investment partners as candidly as possible because we believe our investors benefit from understanding our investment philosophy and approach. Our views and opinions include “forward-looking statements” which may or may not be accurate over the long term. Forward-looking statements can be identified by words like “believe,” “expect,” “anticipate,” or similar expressions. You should not place undue reliance on forward-looking statements, which are current as of the date of this report. We disclaim any obligation to update or alter any forward-looking statements, whether as a result of new information, future events or otherwise. While we believe we have a reasonable basis for our appraisals and we have confidence in our opinions, actual results may differ materially from those we anticipate.

The information provided in this material should not be considered a recommendation to buy, sell or hold any particular security. Investments made with Altrius Capital Management, Inc. are not deposits or obligations of any bank, are not guaranteed by any bank, are not insured by the FDIC or any other agency, and involve investment risks, including possible loss of the principal amount invested.

Past performance is not a guarantee of future returns.

Certain material in this work is proprietary to and copyrighted by Litman Gregory Analytics and is used by Altrius Capital with permission. Reproduction or distribution of this material is prohibited and all rights are reserved.